The Isabella County Sheriff's Office says they have made an arrest connected to the string of commercial/business break-ins around the county.

The Sheriff says through tips given to the BAYANET drug task force, they were able to identify a possible suspect after a vehicle was reported stolen in the area of the break-ins.

During an investigation last night the suspect was seen leaving his residence in the 600 Block of South Bradley Street in the stolen vehicle. He was followed to the Isabella County Coldwater Park campgrounds. Detectives were able to locate the man who appeared to be casing local businesses and/or the camp grounds office. The man was taking into custody without incident.

A search warrant was obtained for his residence and law enforcement raided the residence earlier this morning.

Multiple items have been discovered relating to the break in’s.

The investigation is ongoing.

The Michigan Public Service Commission has approved nearly $270 million in electricity rate cuts for customers of DTE and Consumers Energy because of utility savings from the federal corporate income tax overhaul.

The cut will save consumers nearly $2.50 a month.

The commission said the rate adjustments will be reflected in customer bills starting in August.

Nearly 800 cyclists will be stopping in Big Rapids Friday as part of the 31st annual Make-A-Wish “Wish-A-Mile” Bicycle Tour.

The three day tour starts in Traverse City and riders will travel 100 miles each day  with a finish-line celebration at EATON Proving Grounds Sunday.

Cyclists will be making an overnight stop in Big Rapids before getting back on the road Saturday morning.

The fundraiser is expected to raise $2.55 million to help grant wishes for Michigan kids.

Pepperidge Farms has issued a recall for four varieties of its Goldfish crackers due to possible salmonella contamination.

It is believed the whey powder used to make the crackers is causing the salmonella.

No illnesses have been reported.

Dracula and all of his monster friends from Hotel Transylvania are back and this time they need a vacation.

The movie follows Dracula (Adam Sandler) as his boring hotel business and lack of love continue to bring him down. Wanting to bring back his joy, daughter Mavis (Selena Gomez) surprises Dracula and the rest of his best friend-monster pack with an adventurous monster cruise. Initially angered by this, Dracula slowly begins enjoying himself and even finds a new crush in the mysterious yet charming cruise captain Ericka (Kathryn Hahn). However, things take a left turn when former nemesis Abraham Van Helsing (Jim Gaffigan) hunts the cruise, threatening the lives of all monsters aboard.

All the voice actors are back plus some- check out the list, you might be surprised! This is a great family movie (especially awesome for ten and under)- it'll keep the kids and adults smiling and entertained.

I thought this movie was better than the second one!

There is a star studded cast in this movie I was surprised to see on its cast IMDB page.

Don't forget at Bulldog Cinemas they have great concession deals like $2 pop and popcorn on Wednesday's and $5 all day movies on Thursday! For the latest movies and show times visit Bulldogcinema.com

A Ferris State University hockey player has been charged with three felonies for an alleged sexual assault of a female student.

In a statement made by administrators at Ferris State, the alleged incident occurred at an off campus house between the late night hours of July 7th and early morning hours of July 8th.

He was released from jail but has to wear a GPS tether.

Ferris State University has been made aware of an allegation of a sexual assault of a female student. The incident reportedly occurred at an off-campus location during the late-evening, early-morning hours of July 7-8. A male student was arrested as part of the Ferris State University Department of Public Safety investigation. The University takes all allegations of sexual assault seriously and thoroughly investigates each case. A commitment to maintaining a safe environment for our students, faculty, staff and visitors is our highest priority.

Detectives in Osceola County are asking for the public's help in finding the origins of a bicycle.

Police believe this isn't just an ordinary bike but the one used by the person suspected in the June 29th Lake-Osceola State Bank robbery.

According to detectives, a repainted gold bike was recovered just north of Hemlock Street in the village of Tustin following the June 29th robbery.

The bike has 26-inch wheels, a cloth covered seat and the original color is believed to be black. There was no name brand found on the bike and it is equipped with Shimano running gear and brakes. Detectives note many bike manufacturers use the Shimano brand.

A Stanwood man was arrested in connection to a home invasion.

Deputies say they received a call Sunday night about a home invasion in progress at a residence in Morton Township.

An Investigation by police resulted in the arrest of Joseph Caruso for first degree Home Invasion, resisting and obstructing, Habitual offender 4th offense and a neglect child support warrant.

Caruso is being held on a $150,000 Cash or surety bond at the Mecosta County Jail.

There's a boil water advisory in Newaygo in west Michigan.

It's because of a loss of water pressure.

That can cause bacteria to get into the system so the boil water advisory is a precaution.

It could be in place for a few days.

Just a heads up for those commuting in Big Rapids this weekend, city officials say beginning at 8am on Saturday, State Street will be closed from Maple Avenue to Pine Street.

Detours will be in place to direct traffic around the closed section.

Maple Creek Park will also be closed during that time as well.

Officials are hoping the road closure on Saturday will only last for 4-5 hours. 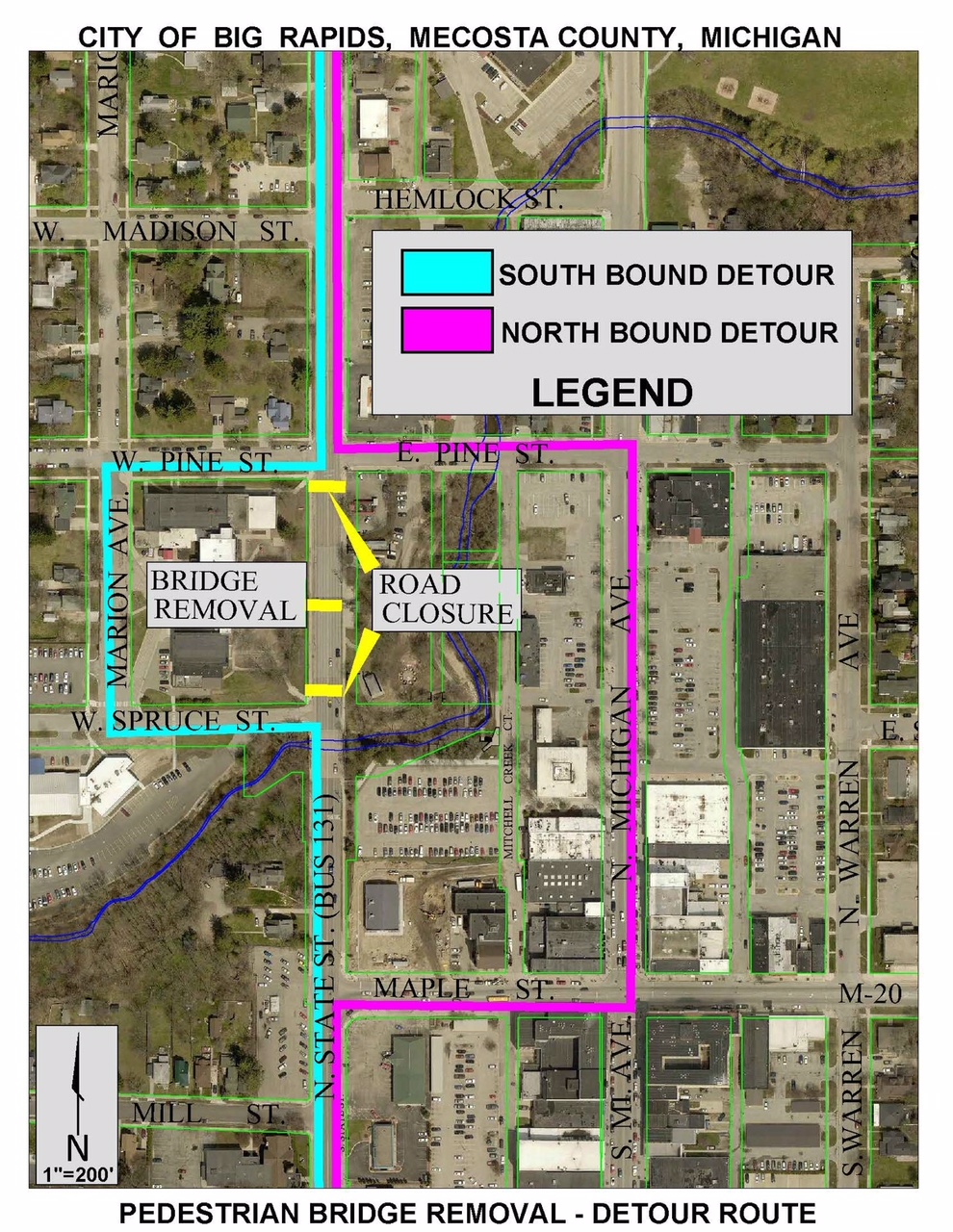 It's called smishing - that's when a scammer sends you text messages that appear to be from someone trustworthy. The goal for the scammer is to have you respond with personal information or clicking on a link.

The AG's office says smartphone users are three times more likely to fall for them.

You are encouraged to delete such texts and don't respond to suspicious numbers.

A 35-year old Farmington Hills man will be in prison for at least the next five years following his sentence on sex crime charges.

Daniel Carlson was found guilty by a jury of sexually assaulting an incapacitated victim following a three-week trial.

The incident happened in October 2016 at a Halloween Party at Tullymore Golf Resort.

Prior to his trial, Carlson was charged in a second case where he's accused of sexual assault during an alleged incident in Morton Township back in March of 2016.

A Clare man is facing at least two years in prison after pleading guilty to almost a dozen breaking and entering charges connected to storage unit break-ins in Big Rapids Township.

Morgan admitted to ten storage unit thefts at a facility located on 14 Mile Road in Big Rapids Township. As part of the plea agreement, the habitual offender status of Morgan’s charges was dismissed, and the felonies were treated as second offenses.

The Clare man is expected to be sentenced in August.

A 26-year old Rodney woman is officially charged with crimes related to her arrest on Friday evening.

Marissa Lyn Thompson is charged with forgery, uttering and publishing, embezzlement from a vulnerable adult and larceny in a building. Thompson was also charged as a habitual offender due to previous crime convictions.

Michigan State Police say an elderly woman who Thompson was a caretaker of, accused the Rodney woman of taking over $2,000 from her. The embezzlement started in early June and was discovered early this month.

According to troopers, Thompson wrote multiple checks to herself out of the victims checking account.

Police made contact with Thompson and conducted an interview, she later confessed to the crimes.

A 26-year old Rodney woman was arrested Friday evening on charges of embezzlement and elder abuse.

Michigan State Police say the victim accused her caretaker of taking over $2,000 from her.

The embezzlement started in early June and was discovered early this month.

According to troopers, the suspect wrote multiple checks to herself out of the victims checking account.

Police made contact with the Rodney woman and conducted an interview, she later confessed to the crimes.

Further, the suspect had evidence of the crime in her purse.

Police in Mecosta County are continuing to investigate an accident where a man from Morley was struck and killed while walking on the road Saturday morning.

The accident happened around 2:30am Saturday on Mckinley Rd near 150th Ave in Colfax Twp. , deputies say a 20 year old Rodney woman was traveling westbound on McKinley Rd when the car she was driving struck and killed a 25-year old Morley man.

Alcohol and drugs are not believed to be factors in the accident.

The accident is still under investigation.

The start of July means a law created to cut down on the amount of drugs doctors prescribe to patients.

The new law, which went into effect Sunday, allows doctors to give no more than a seven day supply of medication for patients with short term pain, such as broke bones, surgeries and illnesses.

Sponsors of the legislation say if fewer drugs are available, there's less of a chance for abuse and addiction.

Utility officials say power should be restored to customers in Green and Big Rapids Townships by 4pm this afternoon.

The Big Rapids City Commission meets tonight for their first meeting of the month.

On the docket is a discussion on water and sewer rates during study session.

Commissioners will also take action on a resolution that establishes park hours at all city parks and also to prohibit camping at city parks as well.

The meeting begins at 6:30pm at City Hall in Downtown Big Rapids.