The diagnosis was made after the 2-year-old doe died and carcass samples were submitted for routine testing under a surveillance program for deer raised on farms.

It requires those in some high-risk areas to be quarantined.

83 deer have been identified with the sickness in Montcalm County, which is part of Michigan's chronic wasting disease management zone.

Changes today for some Michigan workers.

Teen workers can still be paid 85-percent of the minimum wage, but that rate will increase to $8.03 per hour.

Police in Big Rapids say they have a suspect in custody they believe was involved in a February shooting that occurred in the 400th block of Fuller Ave.

Officials say Paris Antwone “PJ” Jones was arrested on March 22nd at a home on S. Stewart Ave after a warrant was issued.

According to police, the alleged incident occurred on February 1st when Jones is alleged to have shot into an unoccupied home.

The Montcalm County Sheriff's Office says an independent investigation ruled a female inmate who died in its jail in December of 2018, passed away from natural causes.

The ruling comes after a two month investigation by the Michigan Sheriff’s Association MISSION team.

The inmate, 34-year old Amber Lynae Bills, of Big Rapids, had passed away while in custody on December 30, 2018.

The result showed that no jail policies were violated and no criminal acts were committed.

Bills informed the nurse she had used methamphetamine and was withdrawing from the drug. Jail staff promptly moved Bills to a cell with direct observation. The nurse placed her on Librium protocol when she discovered her condition. Bills remained in the jail’s direct observation cell from December 28 until December 30.

In the afternoon of December 30, Bills presented in a manner consistent with her previous condition and was given the prescribed Librium. Soon after officers removed Bills from her cell in an unresponsive state. Bills did not regain consciousness following the application of CPR and life saving measures.

As home and business owners continue to deal with the aftermath of flooding, Governor Gretchen Whitmer has asked the U.S. Small Business Administration to conduct damage assessments in Newaygo County.

More than 130 homes and businesses were damaged by flooding earlier this week.

On Tuesday, the Governor declared a State of Emergency for Newaygo County which makes more resources available to local officials.

A State of Emergency has been declared in Newaygo County by Gov. Gretchen Whitmer after over 130 homes have been flooded.

The county had requested state assistance to address the impacts of heavy rainfall and snowmelt, which resulted in widespread flooding.

Whitmer says as Newaygo County continues to deal with the effects of severe flooding, they are doing all they can to ensure the health and safety of their residents,” She says by signing this declaration, the state can offer even more resources to assist the county’s efforts.

Abby Watkins is the Director of Emergency Services for the county, she says at one point over 100 roads were flooded and dozens have been damaged by the water.

Watkins says almost 90-percent of the home owners effected do not have flood insurance since their homes are not in flood plains.

The Red Cross is now working with county officials to help local residents.

A 46-year-old woman has been killed after she crashed her car into a tractor trailer late last night in west Michigan's Oakfield Township.

Michigan State Police say the woman from Morley crossed the center line around 11:30 last night and hit a tractor trailer.

She was killed , but the 22-year-old driver of the tractor trailer from Big Rapids was not injured.

No word yet if drugs or alcohol were a factor in the crash.

A Farmington Hills man convicted of rape in 2018, is now facing new charges of sexual assault in a second case in Mecosta County.

35-year old Daniel Carlson was video arraigned from prison where he's currently serving 5 to 15 years for a rape that occurred in 2017.

This is the second charge with a separate victim from that incident in 2016.

His bond was set at $1 million dollars.

Carlson is scheduled to be back in court next month.

Police in Newaygo County are looking for a man they say stole a large amount of liquor from the Brohman EZ Mart Gas Station on March 9th.

According to deputies, the suspect stole $150 worth in liquor.

He's described as a black male approximately 6' tall, 25-35 years old. He has facial tattoos, one or two tear drops below one of his eyes and an old English "L" or something similar on his face / cheek area.

No vehicle description as the suspect ran from the store to an unknown location or vehicle.

Anyone with information on the suspects identity is asked to contact police at 231-689-7303.

A two-year old child died over the weekend following a two vehicle accident in Newaygo County.

Deputies say it happened on Elm Avenue, at the Baseline Road intersection in Big Prairie Township Saturday afternoon. That's where a pickup truck driven by an 18-year old man and his passenger a 14-year old male both from Morley failed to stop at the stop sign and hit a car carrying five people.

The driver of the car, a 27-year old woman from New Era and two of her passengers a 29-year old man from Shelby and a 7-year old girl from Shelby were taken to the hospital.

A 5-year-old boy had to be airlifted to the hospital, and the 2-year-old died from her injuries at the scene.

The two teenagers in the pickup truck were not hurt.

There's a push to do away with the time changes in Michigan.

A lawmaker from Manton, near Cadillac, has introduced legislation that would eliminate the time changes.

State Representative Michele Hoitenga says the time change has been a nuisance to workers and students across the state for decades and the practice is antiquated and impractical.

Hoitenga says rather than end Daylight Saving Time, Michigan should remain in it all the time.

The bill has been referred to the House Commerce and Tourism Committee for consideration.

By the way, this is the time change weekend. So set your clock ahead one hour before going to bed on Saturday night.

As expected, Whitmer proposed a 45-cents-a-gallon gas tax increase. She also proposed repealing a 2011 law that eliminated or reduced exemptions from the taxation of pension and other retirement income. Whitmer also proposed doubling the earned income tax credit for low-income earners from 6 percent of the federal credit to 12 percent.

As part of the budget plan, Governor Whitmer is also requesting nearly $53-million dollars for information technology projects that could help residents and improve government operations. One of the projects includes in-car video streaming for State Police troopers to enable real-time data sharing. Another ten million has been set aside to deal with the passage of two ballot proposals that deal with the redistricting of state and congressional districts and establishes new voting rights.

There are several other projects outlined in the budget presented by the Governor. The spending plan includes a three percent increase, or about $40-million dollars, in revenue sharing to cities, counties and townships. In addition, the governor wants to spend about $23-million dollars for the Michigan Public Safety Communications System which will be used by first responders at the state and local levels and to support a new State Police trooper recruit school. Another $2.3-million has been put aside to continue testing and research on Chronic Wasting Disease in Michigan’s deer population.

Governor Gretchen Whitmer plans to embark on a statewide tour today to sell the plan to residents. Whitmer plans a series of speeches, roundtable discussions and town hall meetings. The tour will be an opportunity to explain her budget for 2020 in greater detail and explain why and how she has put this budget forward. The budget tour will start today on the west side of the state. 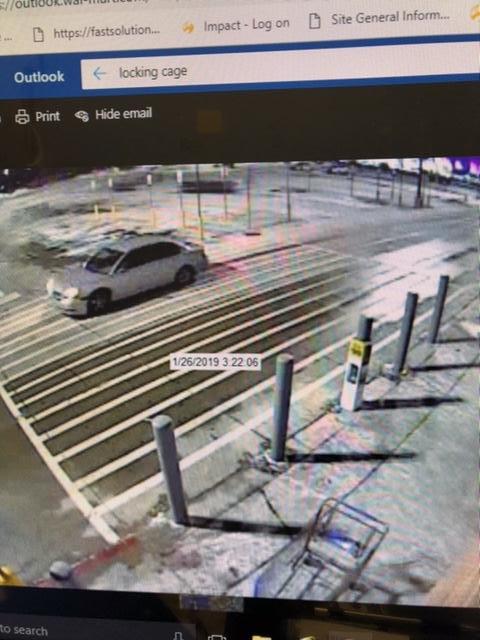 Deputies from the Mecosta County Sheriff’s Office are looking for a man they say stole thousands of dollars worth of electronics from the Big Rapids Walmart early this morning.

Surveillance video showed where a black male suspect entered the store around 3:20 am.  The unidentified male then pried open a locked case behind the employee counter and also cut a security cable to access high dollar electronics.

If anyone has any information in regards to this complaint, the Sheriff’s Office is asking them to contact the Mecosta County Sheriff’s Office at 231-592-0150 or through email at tips@mecostacounty.org.

Deputies in Osceola County are continuing to investigate after a elderly woman slammed her car in the front of a restaurant on Friday.

It happened at the Mr. Pibs Restaurant in the Village of LeRoy.

Deputies say a 75-year old woman from Baldwin, ran into the wall of the restaurant causing damage and injuring two people inside the restaurant.

One of those injured was taken to a local hospital with non life threatening injuries.

The investigation is still ongoing.

Those are two areas that Governor Gretchen Whitmer is expected to focus on when she outlines a new budget Tuesday morning.

The Governor said nobody will be surprised she wants to fix the road and close the skills gap.

According to reports,  Whitmer wants to spend billions more to fix the roads and boost a lagging education system.

In her State of the State speech last month, the Governor talked about fixing the "damn roads," and letting high school grads go to community college for free.

The budget will be unveiled before the House and Senate Appropriations committees.